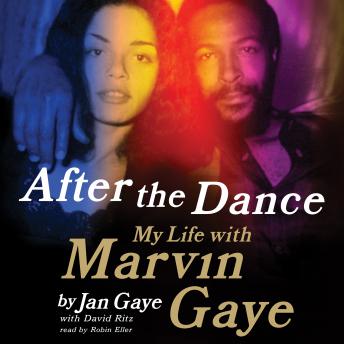 After the Dance: My Life with Marvin Gaye

A riveting cautionary tale about the ecstasy and dangers of loving Marvin Gaye, a performer passionately pursued by all—and a searing memoir of drugs, sex, and old school R&B from the wife of legendary soul icon Marvin Gaye.

After her seventeenth birthday in 1973, Janis Hunter met Marvin Gaye—the soulful prince of Motown with the seductive liquid voice whose chart-topping, socially conscious album What’s Going On made him a superstar two years earlier. Despite a seventeen-year-age difference and Marvin’s marriage to the sister of Berry Gordy, Motown’s founder, the enchanted teenager and the emotionally volatile singer began a scorching relationship.

One moment Jan was a high school student; the next she was accompanying Marvin to parties, navigating the intriguing world of 1970s-‘80s celebrity; hanging with Don Cornelius on the set of Soul Train, and helping to discover new talent like Frankie Beverly. But the burdens of fame, the chaos of dysfunctional families, and the irresistible temptations of drugs complicated their love.

Primarily silent since Marvin’s tragic death in 1984, Jan at last opens up, sharing the moving, fervently charged story of one of music history’s most fabled marriages. Unsparing in its honesty and insight, illustrated with sixteen pages of black-and-white photos, After the Dance reveals what it’s like to be in love with a creative genius who transformed popular culture and whose artistry continues to be celebrated today.

After the Dance: My Life with Marvin Gaye