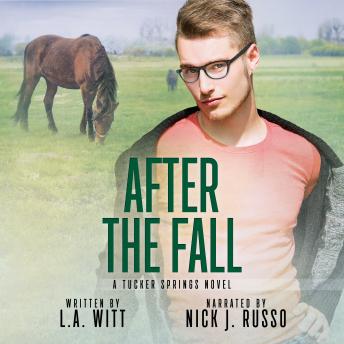 After years of saving every penny, Nathan has finally managed to buy Tsarina, the horse of his dreams, and he's looking forward to a summer of exploring the mountains above Tucker Springs with her. But on their very first ride, a motorcyclist makes a wrong turn, scaring the mare into bolting and leaving Nathan with a broken leg, a broken hand, and a ruined summer.
Ryan is a loner and a nomad, content with working odd jobs before moving on to the next town. Feeling guilty for causing the accident that leaves Nathan in two casts, Ryan offers to keep Tsarina exercised until Nathan heals.
A tentative friendship forms, and a strong attraction grows. Nathan doesn't want feelings getting involved, though. Not after a couple of nasty breakups and especially knowing that Ryan doesn't stay in one place-or relationship-for long. It's only a matter of time before Ryan drifts out of Tucker Springs and out of Nathan's world.
But since when do feelings ever listen to reason? Now it's Nathan who's about to shy away, unless Ryan can ease his fears...assuming Ryan doesn't bolt first.
This previously published book is #6 in the Tucker Springs series, and can be read as a standalone.