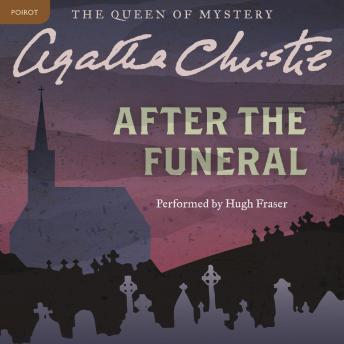 After the Funeral: A Hercule Poirot Mystery

Hercule Poirot is called on to investigate the murder of a brother and sister, in this classic Agatha Christie mystery now available in an updated edition with a foreword Sophie Hannah.

When Cora Lansquenet is savagely murdered, the extraordinary remark she had made the previous day at her brother Richard’s funeral suddenly takes on a chilling significance. At the reading of Richard’s will, Cora was clearly heard to say, “It’s been hushed up very nicely, hasn’t it. But he was murdered, wasn’t he?”

Did Cora’s accusation a dark truth that sealed her own fate? Or are the siblings’ deaths just tragic coincidences?

Desperate to know the truth, the Lansquenet’s solicitor turns to Hercule Poirot to unravel the mystery. For even after the funeral, death isn’t finished yet . . .

"But, he was murdered, wasn't he?" When a family gathers after the funeral of the wealthy head of the family, the reading of the will gets a startling announcement from 'crazy' Aunt Cora. This sets events in motion that bring the dapper Belgian detective out of retirement and leads listeners down a gently-paced, twisting path to the truth. After the Funeral is one of the later Poirot's that Agatha Christie wrote and Poirot is at ease now only taking inquiries for good friends or because he is intrigued by the people involved. In this case, it is both. The family lawyer can't be satisfied after Cora's question, but he can only take his inquiries so far and must turn it over to a professional who knows murder well. The family are made up of one surviving sibling and his wife, a widowed sister in law, and three cousins in the younger generation with spouses. They all have possible motive and as Poirot discovers, opportunity. Poirot is still trying to establish is Richard was murdered. Cora's death was clearly murder, but is it connect to the first death? After the Funeral takes its time and it had some lag, but it was a character-driven piece that explored the individual lives of the family and slowly built up a case for Poirot to catch out the murderer and why. Hugh Fraser narrates and he is my favorite Christie narrator. I enjoy the way he voices a large cast and especially Poirot. All in all, it was a solid mystery that I relaxed and enjoyed.