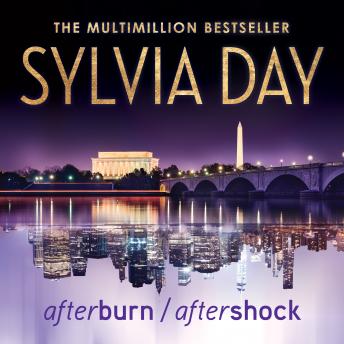 Never mix business with pleasure. Never bring politics into the bedroom. In a way I did both when I took Jackson Rutledge as a lover. I can't say I wasn't warned.Two years later, he was back. Walking into a deal I'd worked hard to close. Under the tutelage of Lei Yeung, one of the sharpest businesswomen in New York, I had picked up a thing or two since Jax walked away. I wasn't the girl he once knew, but he hadn't changed. Unlike the last time we'd drifted into each other's lives, I knew exactly what I was dealing with…and how addictive his touch could be.The inner circle of glamour, sex, and privilege was Jax's playground—but this time, I knew the rules of the game. In the cutthroat business world, one adage rules all: keep your enemies close and your ex-lovers closer…

Afterburn & Aftershock by Sylvia Day, the story of Jax & Gia. The book ended too soon and nothing compared to the Crossfire series. Wish Sylvia Day would think of writing a series based on Jax and Gia. Overall the story was not bad. Jackson Rutledge and Gianna Rossi the main characters were lovers and in a relationship for five months when suddenly Jax disappears from her life without an explanation. Gia is still in love with him even after the two year separation. She suddenly meets him in place of work. She works for Ms. Yeung who is a force to reckon with in the restaurant business, and the old feelings surface between the two. Jax is an investor, and is very much in love with her but keeps his distance from her. According to him it is for her own safety. There is no explanation why he had left her so suddenly. He comes from a family of career politicians, and the Rutledge's are a ruthless lot according to Jax. Gia is from a loving and close knit family, also in restaurant business but she wants to further her career and make a name for her self in the industry and works for Ms. Yeung who is also her mentor. Jax is a hot and sexy billionaire. Gia is smart, independent and hardworking woman. They take up where they left off two years ago. There is love and lust between them, and both cannot do without each other. There are secrets, lies and drama, and lack of open communication between them. Jax is secretive and keeps Gia in the dark about his work and family life, which riles Gia to no end. Her love for him is too strong and she realizes that if she has to make a life with Jax she will have to accept him the way he is. I liked the way the story ended. Happy and loving. It would be interesting to read a series on the supporting characters, Vincent, Angelo and Nico, Gia's three brothers., and about Chad and Stacy. The only irritant was the repetition dialogues between Jax and Gia during their fights., which happened a bit too much throughout the story.

The narrators voice sounds very nasaly, it's so obvious that she's trying so hard to make the Brooklyn accident. Just not a fan of the narrator but the book is good