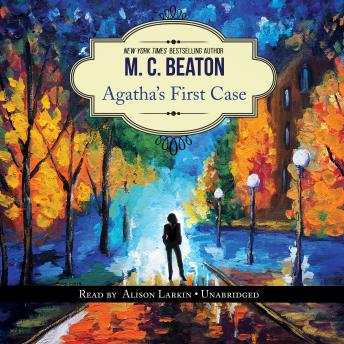 At age twenty six, Agatha Raisin has already come a long way. She has clawed her way up since leaving the Birmingham slum where she was born. She’s lost her Birmingham accent, run away from her drunken husband, and found a job at a public relations office as a secretary. Then her boss asks Agatha to go to the home of Sir Bryce Teller to tell him that he is soon to be arrested for the murder of his wife and that the agency no longer wants to represent him.

Teller, impressed with the pugnacious Agatha, asks her to handle PR for him and even offers her an office and tells her she can hire a staff. Certainly the best thing Agatha can do for her first client is to find out who really murdered his wife and clear his name. And with her wits and gumption, Agatha sets out to do just that.

New York Times bestselling author M. C. Beaton’s character Agatha Raisin is beloved by millions, and this brand-new short story takes us back to where it all began with Agatha’s first case.

“Agatha is like Miss Marple with a drinking problem, a pack-a-day habit, and major man lust.”—Entertainment Weekly, praise for the series