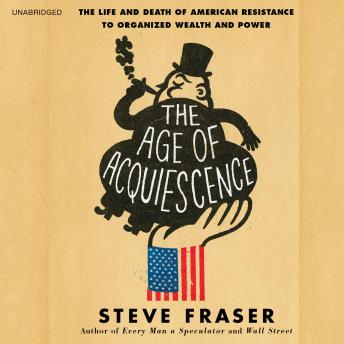 The Age of Acquiescence: The Life and Death of American Resistance to Organized Wealth and Power

A groundbreaking investigation of how and why, from the 18th century to the present day, American resistance to our ruling elites has vanished.

From the American Revolution through the Civil Rights movement, Americans have long mobilized against political, social, and economic privilege. Hierarchies based on inheritance, wealth, and political preferment were treated as obnoxious and a threat to democracy. Mass movements envisioned a new world supplanting dog-eat-dog capitalism. But over the last half-century that political will and cultural imagination have vanished. Why?

The Age of Acquiescence seeks to solve that mystery. Steve Fraser's account of national transformation brilliantly examines the rise of American capitalism, the visionary attempts to protect the democratic commonwealth, and the great surrender to today's delusional fables of freedom and the politics of fear. Effervescent and razorsharp, The Age of Acquiescence is provocative and fascinating.

Age of Acquiescence: The Life and Death of American Resistance to Organized Wealth and Power