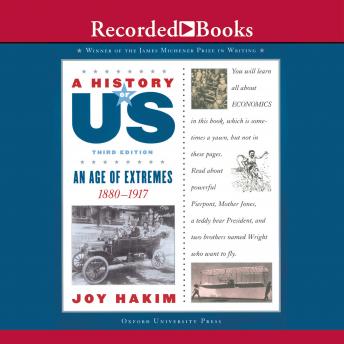 For the captains of industry-men like Andrew Carnegie, John D. Rockefeller, J.P. Morgan, and Henry Ford-the Gilded Age is a time of big money. Technology boomed with the invention of trains, telephones, electric lights, harvesters, vacuum cleaners, and more. But for millions of immigrant workers, it is a time of big struggles, with adults and children alike working 12 to 14 hour a day under extreme, dangerous conditions. The disparity between the rich and the poor was dismaying, which prompted some of the people to action. In An Age of Extremes, you will meet Mother Jones, Ida Tarbell, Big Bill Haywood, Sam Gompers, and other movers and shakers, and get swept up in the enthusiasm of Teddy Roosevelt. You'll also watch the United States tae its greatest role on the world stage since the Revolution, as it enters the bloody battlefields of Europe in World War I.