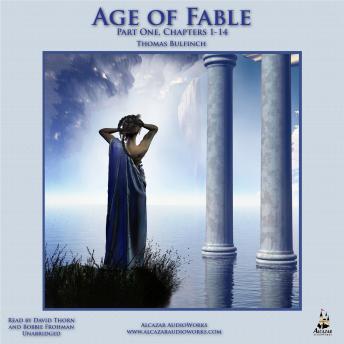 The Age of Fable

Thomas Bulfinch, as one reviewer put it, "Created an anthology of mythology." This audiobook contains the first 14 chapters of The Age of Fable, the first of three volumes, comprising Bulfinch's complete work. The Age of Fable recounts stories of Greek Gods, Demigods and the best known characters in mythology.

In our times, many references are made to these stories and characters in the arts, especially in the fine arts, theatre, and literature.

The stories include:
1. Introduction
2. Prometheus and Pandora
3. Apollo and Daphne, Pyramus and Thisbe, Cephalus and Procris
4. Juno and Her Rivals, Io and Callisto, Diana and Actaeon, Latona and the Rustics
5. Phaeton
6. Midas, Baucis and Philemon
7. Proserpine, Glaucus and Scylla
8. Pygmalion, Dryope, Venus and Adonis, Apollo and Hyacinthus
9. Ceyx and Halcyone (The Halcyon Birds)
10. Vertumnus and Pomona
11. Cupid and Psyche
12. Cadmus, The Myrmidons
13. Nisus and Scylla, Echo and Narcissus, Clytie, Hero and Leander
14. Minerva, Niobe

AUTHOR
Thomas Bulfinch (1796 - 1867), was both an author and a banker. Born in Newton, Massachusettes, Bulfinch was the son of an architect who help create the US Capitol building in Washington.
Best known for Bulfinch's Mythology, a posthumuous collection of his many works popularizing mythology, Bulfinch's style was known for ""Extending the enjoyment of elegant literature.""

COMMENTARY
Reviews for Alcazar AudioWorks' production of The Age of Fable
The myths of ancient Greece and Rome have been woven into Western literature over the centuries for so long that we might not even think about the origins of such common allusions as the Midas Touch or Cupid's arrows. Perhaps you've seen My Fair Lady without knowing it was based on the ancient story of Pygmalion. You may have heard a politician refer to Pandora's Box and understood his reference in a vague way, without having heard the original story.

Thomas Bulfinch, a couple of centuries ago, called mythology ""the handmaid of literature,"" further asserting that literature ""is one of the best allies of virtue and promoters of happiness."" He wasn't claiming that we needed to assume a pagan worldview in order to be virtuous and happy; indeed, his Christian worldview was firmly in place, evident in the editorial comments on the material he recounts. In his effort at promoting cultural literacy, he has produced no dry and dusty reference work, but rather has endeavored to write in a way that entertains while educating.

Alcazar Audioworks has produced an unabridged reading of the first fourteen chapters of Bulfinch's Age of Fable, the first volume of a three-part series. Now, if you know me, you know that the word ""unabridged"" thrills my literary heartstrings. Not only am I a reader, but I am such a reader that I hate to think of missing a single word that an author has taken pains to set down in print.

In about seven hours of listening time, you'll learn the origins and attributes of the Greek gods and their Roman counterparts, followed by a series of myths as told by the ancients. There are not only the stories we've seen in picture books, like that of the greedy king who wished that everything he touched would turn to gold, and the boy who wished to drive the chariot of the Sun and pestered his father until, against his better judgment, that father gave in, and disaster followed. Bulfinch also recounts Greek accounts of Creation and Flood. It is fascinating to see kernels of Truth hidden among the chaff of details, and in our home this made for lively discussion after the listening.

The younger ones were thrilled every time a familiar story, first found in picture books, was told, but they were also interested in the stories new to them. Bulfinch does not glorify his subject matter; he just tells the stories in an engaging manner, occasionally inserting a comment of his own. It was interesting to hear our listeners' opinions after various stories, how they'd heard an allusion in our reading aloud from a more recent work of literature, but not understood it until now. Of course, there's also the occasional criticism, such as, ""Those Greeks sure lack imagination. That's the third story so far where someone's been turned into a tree."" Naturally, that leads to interesting discussion of how that child would have written the story, a nice exercise to lead into creative writing time.

The readers, Bobbie Frohman and David Thorn, handle their material with competence and fine expression, making it easy to listen. They take turns in the reading, which helps keep my flightier listeners' attention. Tracks are marked off every three minutes for ease of finding your place on the CD. I feel like such a sneaky mom - the kids are learning, establishing a good foundation for their later literary studies, and all they know is that they're listening to stories at lunchtime!
Reviewed By: Virginia Jones - EHO Eclectic Homeschool Online

Quotes from/about The Age of Fable or Thomas Bulfinch
""Thomas Bulfinch's study of mythology, which first appeared in 1855, is still the most popular and useful book on classical Greek mythology in English.""

""Popularly known as Bulfinch's Mythology, the volume became one of the most popular books ever published in the United States and the standard work on classical mythology for nearly a century...""

""The Age of Fable, better known as Bulfinch's Mythology, written by Thomas Bulfinch (1796-1867) and first published in 1855, has long been a standard fixture in American homes, schools, and libraries. New editions still appear frequently.""

Thomas Bulfinch
""Our work is not for the learned, nor for the theologian, nor for the philosopher, but for the reader of English literature, of either sex, who wishes to comprehend the allusions so frequently made by public speakers, lecturers, essayists, and poets, and those which occur in polite conversation.""

""Without a knowledge of mythology much of the elegant literature of our own language cannot be understood and appreciated.""

""Chivalry ... framed an ideal of the heroic character, combining invincible strength and valor, justice, modesty, loyalty to superiors, courtesy to equals, compassion to weakness, and devotedness to the Church""
"