The Age of Sacred Terror: Radical Islam's War Against America 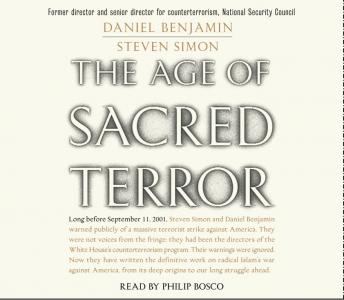 Daniel Benjamin and Steven Simon began working on this book shortly after leaving the National Security Council, where, as director and senior director for counterterrorism, they watched the rise of al-Qaeda and helped coordinate America’s fight against Usama bin Laden and his organization. They warned in articles and interviews about the appearance of a new breed of terrorists who were determined to kill on the grand scale. More than a year before September 11, 2001, they began writing The Age of Sacred Terror to sound the alarm for a nation that had not recognized the gravest threat of our time.

One of their book’s original goals has remained: to provide the insights to understand an enemy unlike any seen in living memory—one with an extraordinary ability to detect weakness and exploit it, one with a determination to inflict catastrophic damage, one that will not be deterred. But after September 11, a second, equally crucial goal was added: to understand how America let its defenses down, how warnings went unheeded, and how key parts of the government failed at vital tasks. The Age of Sacred Terror also describes the road ahead, where the terrorists will look to draw strength, and what the United States must do, at home and abroad, to stop them. For a year after the attacks that redefined terrorism and devastated the public’s sense of security, America has been searching for answers about those responsible for one of the darkest days in our history and explanations for the glaring gaps in our defenses. The Age of Sacred Terror provides both, with unique authority. It is the book that Americans must read to understand the foremost challenge we face.