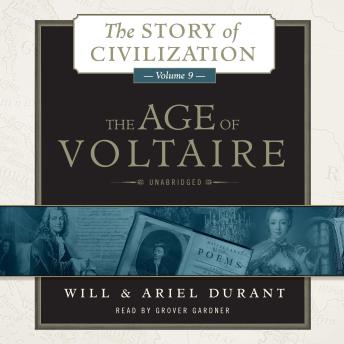 The Age of Voltaire: A History of Civlization in Western Europe from 1715 to 1756, with Special Emphasis on the Conflict between Religion and Philosophy

#9 of The Story of Civilization

The Age of Voltaire, the ninth volume of the Story of Civilization, is an in-depth examination of France and England in the first half of the eighteenth century. In this masterful work, listeners will encounter

the English ideas that inspired the Enlightenment in France-skepticism, scientific experiment, constitutional government, 'natural rights,' and individual liberty; the salons of Paris, where the wits and thinkers of all Europe gathered to exchange ideas; the philosophes-intellectuals, playwrights, and poets who consulted and consorted with kings and queens; Voltaire himself-the incarnation of the Enlightenment and a devotee of reason who still defended religious faith; Mme. Pompadour, patron of the philosophes, who seduced King Louis XV and through him influenced French policy; the Augustan Age in English literature-Alexander Pope's poetry, Jonathan Swift's satires, and the novels of Samuel Richardson and Henry Fielding; and the growing parasitism of the aristocracy and rising power of the commercial class.