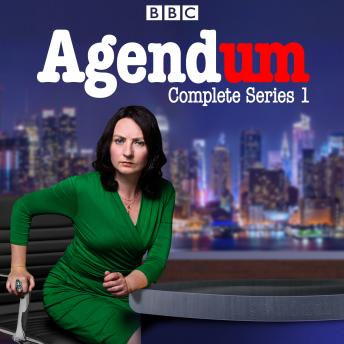 A current affairs parody & stupidly feasible visit to the 24-hour Hall Of Opinion Mirrors. Because there are two stories to every story.

Created by Jason Hazeley and Joel Morris, the masterminds behind Philomena Cunk and the adult spoof Ladybird books, the show was piloted in September 2017 and sent off to Radio 4. 28 minutes later, it was commissioned for its first series, which started going out in August 2018...

In Episode 2, “Crisis”, Kath Hughes, Simon Kane (“John Finnemore’s Souvenir Programme”) and Tayla Kovacevic-Ebong join the Agendum team as a cotton-based crisis, a row about dimensionality and the ethics of the whoopee cushion are analyzed with forensic skill by a team of paid voices, chaired by chairperson-in-chief Alexandra Palisades.

In the third episode, (“Shock'), a deadly pandemic, an inappropriate economic yardstick and a very special anniversary are thrown about by some talking heads who probably came in a taxi, corralled by presenterer Alexandra Palisades.

And in the final episode- “Threat” - the very young, the very old and Stevenage all come under the microscope of talking, collimated by Alexandra Palisades. Also featuring Peter Serafinowicz (“Shaun Of The Dead”) as a guest Paul McCartney.

This title is due for release on October 18, 2018
We'll send you an email as soon as it is available!