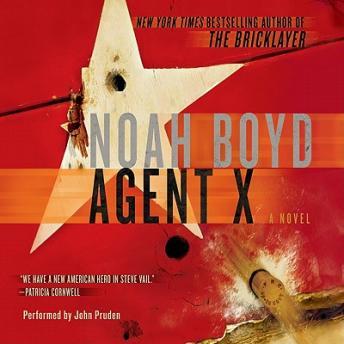 “Vail is in the mold of Lee Child’s Jack Reacher and Robert Crais’s Joe Pike….This guy has movie written all over him.”
—Chicago Sun-Times

“Fans of Sam Spade and Jack Reacher will feel right at home with this new tough guy.”
—Boston Globe

“We have a new American hero in Steve Vail.”

Steve Vail, former discarded covert operative and the FBI’s new go-to guy for the toughest jobs, returns in Agent X—the pulse-pounding follow-up to the explosive New York Times bestselling debut thriller by Noah Boyd, The Bricklayer. A former FBI agent himself, author Boyd pulls out all the stops in Agent X—as “the Bricklayer” hunts down an elusive Russian spy in a taut and authentic thriller that rivals the very best of Brad Thor, Vince Flynn, Stephen Hunter, and Robert Ludlum.