Agents of Influence: A British Campaign, a Canadian Spy, and the Secret Plot to Bring America into World War II 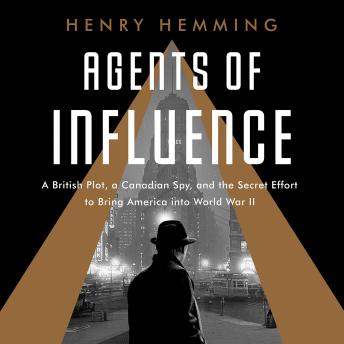 The astonishing story of the British spies who set out to draw America into World War II
As World War II raged into its second year, Britain sought a powerful ally to join its cause-but the American public was sharply divided on the subject. Canadian-born MI6 officer William Stephenson, with his knowledge and influence in North America, was chosen to change their minds by any means necessary.
In this extraordinary tale of foreign influence on American shores, Henry Hemming shows how Stephenson came to New York--hiring Canadian staffers to keep his operations secret--and flooded the American market with propaganda supporting Franklin Roosevelt and decrying Nazism. His chief opponent was Charles Lindbergh, an insurgent populist who campaigned under the slogan 'America First' and had no interest in the war. This set up a shadow duel between Lindbergh and Stephenson, each trying to turn public opinion his way, with the lives of millions potentially on the line.

Agents of Influence: A British Campaign, a Canadian Spy, and the Secret Plot to Bring America into World War II