The Air We Breathe: A Novel 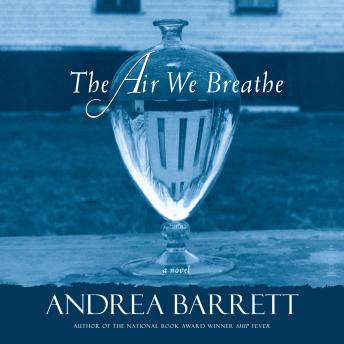 In the autumn of 1916, Americans are debating whether to enter the First World War. There are “preparedness parades,” and headlines report German spies. But in an isolated community in the Adirondacks in upstate New York, the danger is barely felt. At Tamarack Lake the focus is on the sick. Wealthy tubercular patients live in private cure cottages; charity patients, many of them recent immigrants from Europe, fill the sanatorium.

Here, in the crisp air, time stands still. Prisoners of routine and yearning for absent families, the inmates, including the newly arrived Leo Marburg, take solace in gossip, rumor, and secret attachments.An enterprising patient initiates a weekly discussion group. When his well-meaning efforts lead instead to tragedy and betrayal, the war comes home, bringing with it a surge of anti-immigrant prejudice and vigilante sentiment. Andrea Barrett pits power and privilege against unrest and thwarted desire, in a spellbinding tale of individual lives in a nation on the verge of extraordinary change.

“In the fall of 1916, as the US involvement in WWI looms, the Adirondack town of Tamarack Lake houses a public sanitarium and private cure cottages for TB patients…Details of New York tenements and of the sanitarium’s regime are vivid and engrossing. The plot, which hinges on the coming of WWI, has a lock-step logic…the tragedy, betrayal, and heartbreak of war extend far beyond the battlefield.”--Publishers Weekly

Air We Breathe: A Novel

This title is due for release on October 17, 2007
We'll send you an email as soon as it is available!