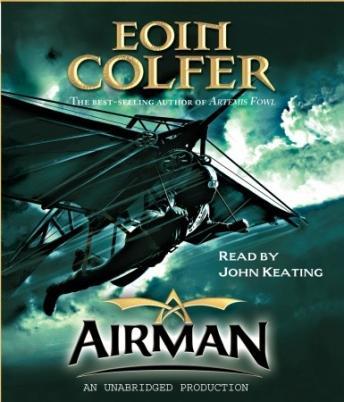 Conor Broekhart was born to fly. In fact, legend has it that he was born flying, in a hot air balloon at the Paris World’s Fair.

In the 1890s Conor and his family live on the sovereign Saltee Islands, off the Irish coast. Conor spends his days studying the science of flight with his tutor and exploring the castle with the king’s daughter, Princess Isabella. But the boy’s idyllic life changes forever the day he discovers a deadly conspiracy against the king. When Conor tries to intervene, he is branded a traitor and thrown into jail on the prison island of Little Saltee. There, he has to fight for his life, as he and the other prisoners are forced to mine for diamonds in inhumane conditions.

There is only one way to escape Little Saltee, and that is to fly. So Conor passes the solitary months by scratching drawings of flying machines on the prison walls. The months turn into years; but eventually the day comes when Conor must find the courage to trust his revolutionary designs and take to the skies.

This was great. It kept my two girls (7 & 9) on the edge of their seat! It was quite sad in parts, so although we really liked it, we were not willing to listen to it again, since we would have to relive the sad parts too.

Absolutely wonderful story and as the prior reviewer indicated it is not juvenile reading. The story is captivating, inspiring and kept me on the edge of my seat. I adore the reader, his timing is impeccable and he was fantastic with his ability to portray various persona. Great book for everyone.

I can't understand why the publishers call this "Young Fiction". It's brilliant, and will appeal to children of ALL ages. The story has pace, humour, and a good story line. It has swashbuckling fights, narrow escapes, rescue, and more. I listened intently as the narrator did a fine job. This is not sci-fi like Artemis Fowl. But don't let that put you off. It's a great story, brilliantly told, and thoroughly enjoyable.