The Airmen and the Headhunters: A True Story of Lost Soldiers, Heroic Tribesmen and the Unlikeliest Rescue of World War II 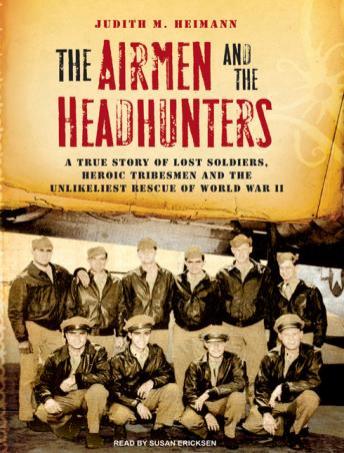 November 1944: Army airmen set out in a B-24 bomber on what should have been an easy mission off the Borneo coast. Instead they found themselves unexpectedly facing a Japanese fleet-and were shot down. When they cut themselves loose from their parachutes, they were scattered across the island's mountainous interior. Then a group of loincloth-wearing natives silently materialized out of the jungle. Would these Dayak tribesmen turn the starving airmen over to the hostile Japanese occupiers? Or would the Dayaks risk vicious reprisals to get the airmen safely home? The tribal leaders' unprecedented decision led to a desperate game of hide-and-seek and, ultimately, the return of a long-renounced ritual: head-hunting.

A cinematic survival story that features a bamboo airstrip built on a rice paddy, a mad British major, and a blowpipe-wielding army that helped destroy one of the last Japanese strongholds, The Airmen and the Headhunters is a gripping, you-are-there journey into the remote world and forgotten heroism of the Dayaks.

Airmen and the Headhunters: A True Story of Lost Soldiers, Heroic Tribesmen and the Unlikeliest Rescue of World War II