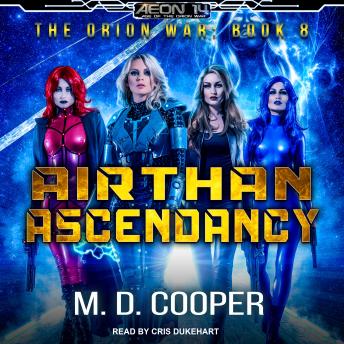 Tangel is still reeling from her battle with the ascended AI, but she still needs to complete her negotiations with the League of Sentients and bring them into the Alliance. Once that agreement is in place, the Alliance will be in a position to hit the Hegemony on multiple fronts, beginning the process of defeating humanity's oldest empire. But unbeknownst to Tangel, a force of Widows is present on Lunic station, eager for the opportunity to derail that agreement though Tangel's death.

Three thousand light years toward the galactic core, Sera is preparing for her assault on Airtha, a deadly mission that will take the best the Alliance can muster and pit it against the ascended AI in an effort to end the civil war wracking the Transcend. But Lisa Wrentham's Widows are moving into Airthan space as well, fully prepared to destroy the entire ring if it will mean the destruction of the ascended AI that rules it.

Both of those missions are in peril from more than just the threat of the Widows; the core AI Epsilon is moving against Tangel's forces, and Cary will face a threat far more insidious than she'd ever expected. One which may take her to their enemy's seat of power. But Bob and Tangel can only be in one place at a time, and someone is going to be on their own.