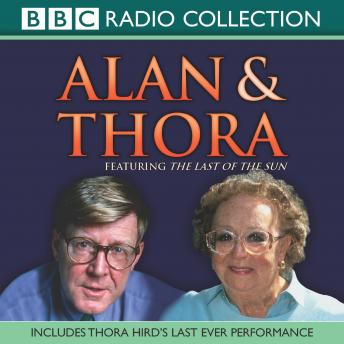 Until the time of her death in 2003, much-loved actress Thora Hird worked regularly with the playwright Alan Bennett. Now, in a specially written introduction and postscript, Bennett recalls his work and friendship with Thora, and introduces three examples of their collaboration. In The Last of the Sun, Dolly's remaining days in an old people's home are enlivened by a seemingly respectable man. Recorded in 2002, Thora Hird's last ever performance, in a part written especially for her, is moving and memorable. In A Cream Cracker Under the Settee, Doris has taken a fall at home, and until someone comes to rescue her she's left immobile and in reflective mood. This monologue features one of Thora's best-remembered performances. Waiting for the Telegram sees Violet remembering how she lost her first young man - but she does not see how close she is to losing her second. This heartbreaking piece won Thora Hird huge critical acclaim, and showcases her acting genius.