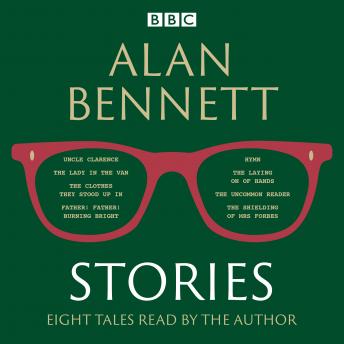 A unique collection of eight Alan Bennett stories, read by the author. Alan Bennett is one of Britain's best-loved authors and an acclaimed storyteller. This exclusive compilation includes eight of his best tales, collected together for the first time.

Here is his celebrated, iconic memoir The Lady in the Van; as well as two fascinating autobiographical accounts of his family and childhood. Uncle Clarence sees Bennett visiting the grave of a relative who died in Flanders in 1917; while in Hymn he joins forces with composer George Fenton and the Medici String Quartet to explore his musical memories.

Bennett's incisive, acute observations shine through in his fiction too, with wry, moving and darkly humorous meditations on death (Father! Father! Burning Bright and The Laying On of Hands), sex (The Shielding of Mrs Forbes) and middle-age ennui (The Clothes They Stood Up In). His gift for affectionate satire reaches its pinnacle in The Uncommon Reader, a delightful tale in which the Queen discovers the pleasures of literature.

Poignant, compassionate, wise and witty, the stories included are The Lady in the Van, Uncle Clarence, The Clothes They Stood Up In, Father! Father! Burning Bright, Hymn, The Laying On of Hands, The Uncommon Reader and The Shielding of Mrs Forbes. Duration: 13 hours approx.