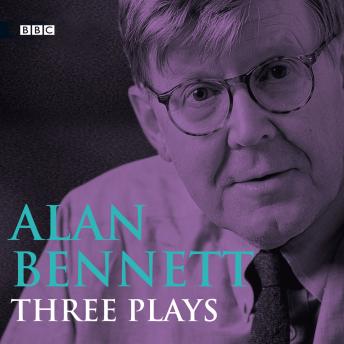 Clever, funny and poignant, Alan Bennett’s masterful plays are rightly regarded as modern classics. Kafka’s Dick is Bennett’s brilliantly clever comedy drama that examines the relationship between life and art, and asks what was Kafka’s embarrassing little problem... Alison Steadman, Richard Griffiths and Nigel Anthony star in this BBC Radio 4 adaptation, described by the Daily Telegraph’s Gillian Reynolds as ‘Pure joy’. Forty Years On stars Alan Bennett in the production of his own acclaimed satirical comedy about a headmaster of Albion House who is retiring and takes part in the end-of-year entertainment for the last time. It also stars Robert Bathurst and Eleanor Bron. An Englishman Abroad stars Michael Gambon and Penelope Wilton as Guy Burgess and Coral Browne in this BBC Radio full-cast drama based on a real-life chance encounter in 1958 between the world famous spy and a Shakespearean actress.