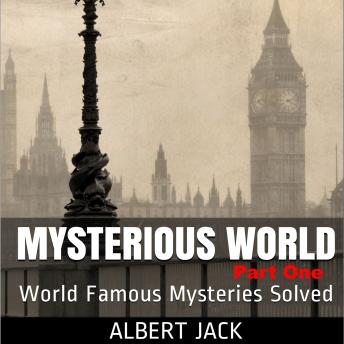 From the internationally best selling author of Red Herrings and White Elephants, Pop Goes the Weasel, New World Order and many more;
Albert Jack's Mysterious World Part One is a collection of the world's most famous and puzzling mysteries.
What really happened to Agatha Christie?
Who is responsible for Crop Circles
Where is Bigfoot?
Could Aliens really exist?
From crop circles to the Scottish lighthouse keepers who vanished one stormy night and from religious visions to the spine tingling tale of a restless family tomb, bestselling author Albert Jack has now turned his detective skills to the mysteries that have baffled so many over the years.
And he has discovered all kinds of fascinating and surprising evidence.
Using 'Occam's Razor' Jack neatly peels away the myth, the legend, the improbable and unlikely and exams only the plausible.
'Sometimes the smarter stocking-filler may even help you to think better as well as to trounce the rival quiz crew.
From the Bermuda Triangle to the Loch Ness Monster Albert Jack offers a crash course in sceptical thinking. Brilliant' - The Independent, Books of the Year.
Part One Includes
The Famous Aurora Spaceship Mystery
The Mysterious Death of God's Own Banker
Try to See It from My Angle: The Bermuda Triangle
Does Bigfoot Exist?
The Spine-chilling Tale of the Chase Vault
Committing the Perfect Crime: The Mysterious D. B. Cooper
The Real-life Agatha Christie Mystery
Who Really Makes Crop Circles?
The Missing Navy Diver Buster Crabb
The Dover Demon
The Loch Ness Monster
Note: Part of Albert Jack's Mysterious World Series