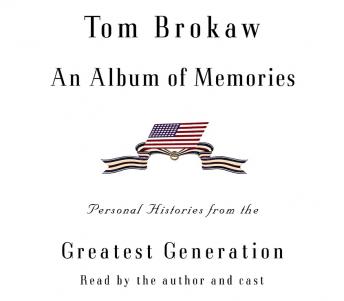 An Album of Memories: Personal Histories From the Greatest Generation

“I cannot go anywhere in America without people wanting to share their wartime experiences....The stories and the lessons have emerged from long-forgotten letters home, from reunions of old buddies and outfits, from unpublished diaries and home-published memoirs....As the stories in this album of memories remind us, it truly was an American experience, from the centers of power to the most humble corners of the land.”
—Tom Brokaw

In this beautiful American family album of stories from the Greatest Generation, the history of life as it was lived during the Depression and World War II comes alive and is preserved in people’s own words. Photographs and time lines also commemorate important dates and events. An Army Air Corps veteran who enlisted in 1941 at age seventeen writes to describe the Bataan Death March. A black nurse tells of her encounter with wartime segregation. Other members of the Greatest Generation describe their war—in such historic episodes as Guadalcanal, the D-Day invasion, the Battle of the Bulge, and Midway—as well as their lives on the home front. Starting with the Depression and Pearl Harbor, moving on through the war years in Europe, in the Pacific, and at home, this unique book preserves a people’s rich historical heritage and the legacy of a nation’s heroism in war and its courage in peace—in the shaping of their lives and of the world we have today.

I would definitely recommend listening to this selection. It is a great review of the history before and after WWII, with very touching letters from those personally affected by it. I am generally a big crybaby, and many of the stories did indeed bring tears. I do have a greater appreciation for the sacrifices made by "The Greatest Generation."

A warm contiuation of the conversations- over- coffee feeling that began with his first book about that Greatest Generation. I could listen to a hundred more collections from this fleeting national treasure that will soon be with us no more.

This title is due for release on January 2, 2001
We'll send you an email as soon as it is available!