The Alchemist's Touch: A Book of Underrealm 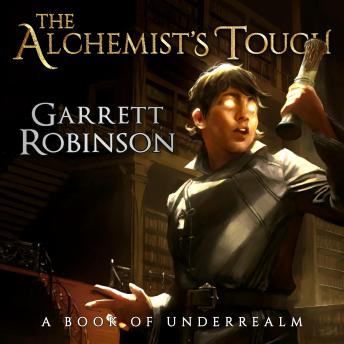 To save his kingdom, Ebon may have to betray his father. He's sort of fine with that.
A new series by Amazon #1 Bestseller Garrett Robinson.
All his life, Ebon has been denied the opportunity to learn magic. Though he was born an alchemist, his father would never let him attend the Academy for Wizards and master his powers.


But in his sixteenth year, everything changes when his aunt intervenes and enrolls him in the Academy. After years of living under the thumb of his cruel father, he finally has a chance to make friends of his own, as well as experiencing all the mystery and wonder of the High King’s Seat, the greatest city in the history of the nine kingdoms.


But with his new freedoms come new troubles as well. Ebon has always been able to ignore his family’s evil reputation, but no longer. Now he finds himself being pulled into dark schemes he cannot understand, and everything seems to be building to a drastic confrontation that may shake the foundations of Underrealm.


As darkness gathers and more and powerful players enter a deadly game, Ebon faces an impossible choice: remain loyal to a family that has always seen him as a nuisance, or turn against them to preserve the law and order of his nation.


And the doom that weighs on his decision is greater than he can begin to understand.


Buy it NOW to join tens of thousands of readers on an epic adventure!

Alchemist's Touch: A Book of Underrealm