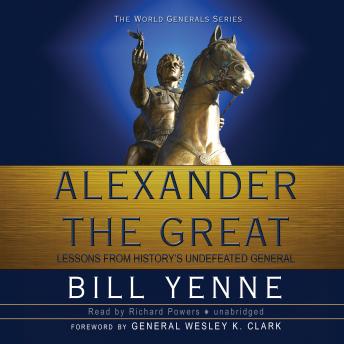 Alexander the Great is considered one of the most successful commanders of all time and was known to be undefeated in battle. He is mentioned in the Bible as well as the Qur’an and is on the shortest of short lists whenever the world’s best military leaders are catalogued. When asked to name other great military leaders, Caesar reportedly said Alexander was the only great one.

Born in 356 B.C., the son of Philip II of Macedonia, Alexander the Great was educated by Aristotle, became a consummate horseman, and commanded a wing of his father’s army in the victory over the Thebans and Athenians at the Battle of Chaeronea — all when he was still a teenager. By the time of his death at age thirty-two, he had united Greece and had amassed an empire that stretched from the Adriatic Sea to the Indus River and included all of Persia and most of Egypt. He ruled as both the shah of Persia and as a pharaoh of Egypt by right of conquest, and he was also crowned king of Asia. The scope of his military prowess remains awe inspiring to this day. Yenne’s masterful biography shows Alexander’s influence on the course of cultural and political history and discusses his leadership, strategy, and legacy.