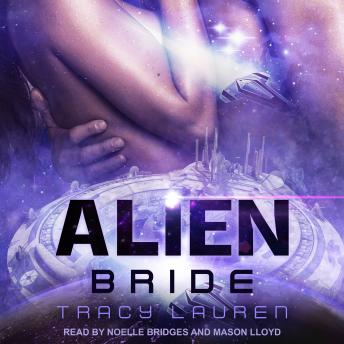 Alessandra Kennedy wakes up to a veritable hell, locked in a cage and held captive by aliens. But her greatest fear is of what lies beyond those cell doors. What horrors will the new life beyond her prison have to offer? She imagined every worst case scenario and all the horrible things that might await her, but never once did she imagine she would become an alien's bride. The strange new culture that takes her in certainly does things differently than humans. Will she be able to get through the time she shares with her alien husband (without arguing) for long enough to make it home? Or will she lose her heart somewhere along the way?

Kye Amara, the rich and cocky diplomat, has always had everything at his disposal: money, women, success. But when a neighboring government tries to impress him with a gift of five beautiful slaves he finds himself drawn to one of them. Quickly this human tears down everything Kye thought he knew about himself, challenging him in a way he has never experienced before. Has Kye Amara finally met his match? And will he be able to prove he is man enough for his alien bride?