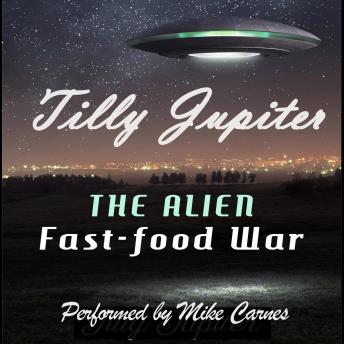 When remote-controlled aircraft begin behaving erratically, even crashing, there is only one logical explanation – well, there are only two: aliens or your own government. The real shock is finding the signals are coming from people who've eaten at fast food restaurants. Of course, we've known all along the stuff is unhealthy. But this?
====
The aliens started small, buying up a few eateries in malls and some coffee shops. And then they expanded, just as the Asians had before them—but neither education nor commerce was the goal this time. They wanted knowledge, but not the kind that came from schools. “We knew your history, but didn’t know shit about what makes you humans tick,” was what Bernie said.
It didn't take long for them to recognize that we had no idea what made us tick either, so they set out to blaze new trails in understanding peoplekind.
Fast food places provided them with two significant tools for this task: First, humans went there in droves. 'You can't beat them away with a stick,' was how Bernie put it. Once they were there, they could be observed in their natural habitat, as it were. This nicely brought the subjects needed for the aliens’ field studies right to them. Secondly, we ingested, rather indiscriminately a variety of substances passing for food. The aliens developed their protein-based nanosensors and fed them to us. Who knew? The damn things moved into our bloodstreams, analyzing as they went.
“We wanted to get to the heart of the matter,” was the way Doreen put it; I think she was unaware of the implied pun, so we forgave her.
Hungry for data, they continued buying up fast food places, served nanosensors and observed us. We ate the food and the sensors, which transmitted back to data collectors that did some elementary preprocessing and relayed compressed data to, as I’ve said, Omaha...