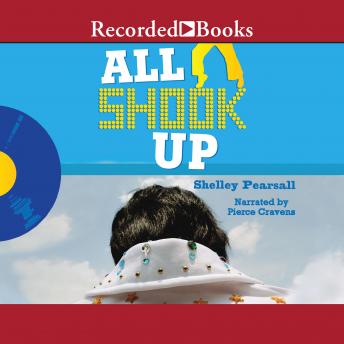 When your life suddenly gets all shook up, can it ever really go back to being normal?

The summer he turns thirteen, Josh finds out he has to live with his divorced dad in Chicago for a few months, and he’s not too thrilled with the idea. He figures he’ll just try to blend in at his new
school until he can get back home.

But when Josh meets his dad at the airport, he can hardly believe the change he sees in his boring shoe-salesman father: new jet-black hair, huge sideburns, and a Hawaiian shirt with orange parrots
(parrots!) on it. Then Josh discovers his dad has even more news— after losing his job, he’s now trying to make a living as Elvis. Yes, Elvis. He’s become a hunk-a, hunk-a burning shame who has no clue
he’s about to ruin Josh’s life.

When his dad is invited to perform at a special fifties concert in his new school, Josh is forced to take drastic action—for his own good, for his dad’s good, and for the general good of society. From
award-winning author Shelley Pearsall comes a hilarious novel about a father and son discovering the important (and sometimes painful) difference between who you want to be—and who you really are.