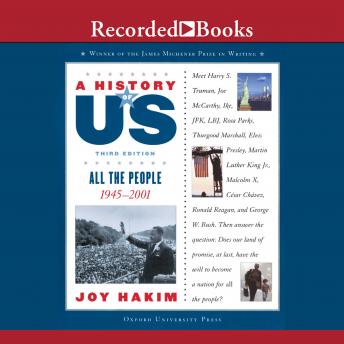 People call it 'post-war,' but All the People covers a period in U.S. history that features battles of another kind-from Cold War combat overseas to struggles for equality at home to learning to live with the threat of terrorism on U.S. soil. During these years, the United States began to be a nation for all its people, outlawing school segregation, protesting war in Vietnam, and campaigning for equal rights for women. From Supreme Court Justice Thurgood Marshall to seamstress Rosa Parks, extraordinary individuals led us back to the ideals espoused by the Declaration of Independence, the Constitution, and the Bill of Rights. But mostly-as it always has been in the United States-it was ordinary citizens who marched and voted and hoped and dreamed and made things happen. All the People included the events of September 11, 2001, and a discussion of how many aspects of the terrorist attacks have brought to the forefront the qualities that keep America strong: representative democracy, freedom of speech and press, and, especially in the face of religious totalitarianism, the basic freedom of religious tolerance.