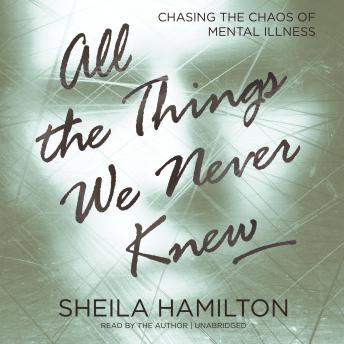 All the Things We Never Knew: Chasing the Chaos of Mental Illness

Even as a reporter, Sheila Hamilton missed the signs as her husband David’s mental illness unfolded before her. By the time she had pieced together the puzzle, it was too late. Her once brilliant, intense, and hilarious partner was dead within six weeks of a formal diagnosis of bipolar disorder, leaving his nine-year-old daughter and wife without so much as a note to explain his actions, a plan to help them recover from their profound grief, or a solution for the hundreds of thousands of dollars in debt that they would inherit from him.

All the Things We Never Knew takes listeners from David and Sheila’s romance through the last three months of their life together and into the year after his death. It details their unsettling descent from ordinary life into the world of mental illness and examines the fragile line between reality and madness. Now, a decade after David’s death, Sheila and her daughter, Sophie, have learned the power of choosing life over retreat, let themselves love and trust again, and understand the importance of forgiveness. Their story will resonate with all those who have loved someone suffering from bipolar disease and mental illness.

Absolutely a 'must read'. The story is beautifully told. The information offered is helpful. The main message, Stigma prevents treatment, is key. I so appreciate Sheila's passion to help break the Stigma and raise Awareness!

Having just recently have a family member commit suicide, I found listening to the author and her story comforting and give me a greater insight into a person with a mental disorder. Thank you.