All the Wild That Remains: Edward Abbey, Wallace Stegner, and the American West 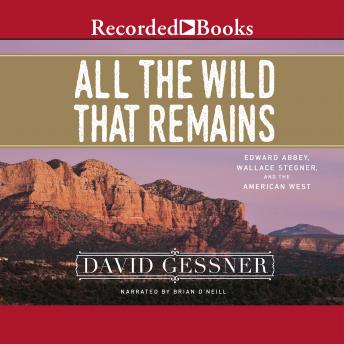 An homage to the West and to two great writers who set the standard for all who celebrate and defend it. Archetypal wild man Edward Abbey and proper, dedicated Wallace Stegner left their footprints all over the western landscape. Now, the award-winning nature writer David Gessner follows the ghosts of these two remarkable writer-environmentalists-from Stegner's birthplace in Saskatchewan to the site of Abbey's pilgrimages to Arches- braiding their stories and asking how they speak to the lives of all those who care about the West. What is the future of a region beset by droughts and fires, by fracking and drilling? What should be done about an ever-increasing population that seems to be in the process of loving the West to death? How might two environmental thinkers with radically different personalities-a competent, mature advocate (Stegner) and a monkey-wrenching anarchist (Abbey)-have responded to the crisis? Gessner takes us on an inspiring, entertaining journey as he renews his own commitment to cultivating a meaningful relationship with the wild, confronting American consumption, and fighting environmental injustice

All the Wild That Remains: Edward Abbey, Wallace Stegner, and the American West