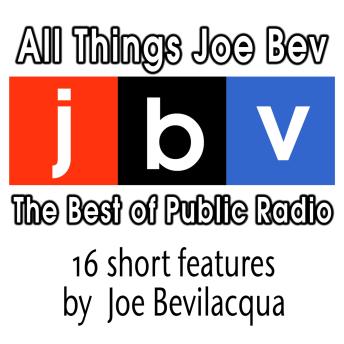 All Things Joe Bev: The Best of Public Radio

All Things Joe Bev: The Best of Public Radio is a collection of sixteen short audio features created for publicradio by veteran award-winning producer Joe Bevilacqua (a.k.a. Joe Bev).
1. "AGuy Named Joe Bevilacqua" - Joe Bevilacqua goes on a search for other peoplewith his name and discovers some uncanny coincidences.
2. "Father's Day" - JoeBevilacqua recounts how a volatile father's gift led him to another fatherfigure and an eventual career.
3. "Losing a Best Friend" - Joe Bevilacquachronicles the rise and fall of a longtime friendship.
4. "Lessons from DawsButler" - Joe Bevilacqua's book passes on cartoon legend's tricks of the trade.
5. "A Tribute to Joe Barbera" - Joe Bevilacqua, Leonard Maltin, and Joe Barberahimself talk about the start of the Hanna-Barbera animation studio.
6. "ArchivingClassic Animated Films and Cartoons" - Joe Bevilacqua reports on how somemembers of America's animated-film industry are building a new digital archiveto preserve classic cartoon footage.
7. "The Kerrville Folk Festival" - JoeBevilacqua reports on one of the longest-running open-air music events in NorthAmerica.
8. "Threadgill's Turns 70" - Joe Bevilacqua reports on the seventiethanniversary of Threadgill's in Austin, Texas, the musical landmark that helpedlaunch the career of many country and rock stars, including Janis Joplin.
9. "ArtistColony Celebrates Its Centennial" - Joe Bevilacqua profiles the one-hundred-year-oldByrdcliffe Arts Colony, nestled deep in the forest of Woodstock, New York.
10. "Math+ Love" - Joe Bevilacqua tracks down his former math professor Ron Reummler tohear how math can explain lost love.
11. "A Valentine from Graham Nash's MAC" -Joe Bevilacqua recounts how on February 12, 1996, an e-mail from rock legendGraham Nash's MAC laptop triggered a series of bizarre coincidences, which ledto the meeting of Joe's future wife, Lorie Kellogg.
12. "Living within YourMeans as a Choice" - When Joe Bevilacqua lost his job, he made some drasticchanges to his lifestyle that turned out to be the best thing that could havehappened to him.
13. "The Christmas I Saved Macy's" - The story of how a fiveyear old Joe Bevilacqua stamped out a fire in the ladies lounge of Bamberger'sdepartment store in Newark, New Jersey, in December of 1964.
14. "A RockabillyChristmas" - Joe Bevilacqua presents rockabilly pioneer guitarist Ray Campi.
15. "An Old Hollywood Story" - In a two-part story, Joe Bevilacqua reports on anextensive archive of interviews with early Hollywood stars conducted byCalifornia schoolteacher and rockabilly pioneer Ray Campi.
16. "An OldHollywood Story" - Part two of Joe Bevilacqua's story on Rays Campi's celebrityinterviews.