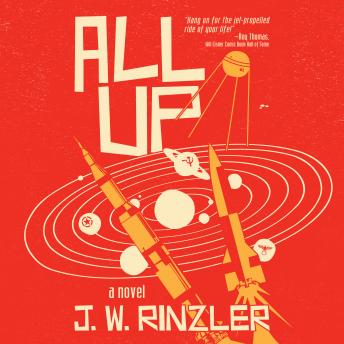 J. W. Rinzler combines actual and speculative history in a sweeping re-creation of the dramatic race to develop rockets, dominate the skies over Earth, and explore our Solar System-an epic that rages through World War II and culminates with the Apollo 11 mission to the Moon.

All Up plunges listeners into the cloak-and-dagger espionage and blitzkrieg battles of World War II that swirled around rocketry; it introduces them to extraterrestrial phenomena, secret organizations, and the nail-biting missions launched from Cape Canaveral-as well as the secrets and unknown history behind Apollo 11's legendary trip to the Moon.

All Up tells the incredible true story of Nazi Germany's Wernher von Braun, Soviet Russia's Sergei Korolev, and America's Robert Goddard as they work feverishly to fulfill their countries' technological, military, and geopolitical objectives. Alongside the Space Age history is the strange but well-documented trail of UFOs-one that leads to a desperate struggle in the highest corridors of power. Who will control the alien technology for their hidden agendas during the Cold War? Secret services compete worldwide in that ruthless game-and no one is a more deadly player than the mysterious agent named Rachel, hot on the trail of war criminal, former SS Brigadeführer Hans Kammler.