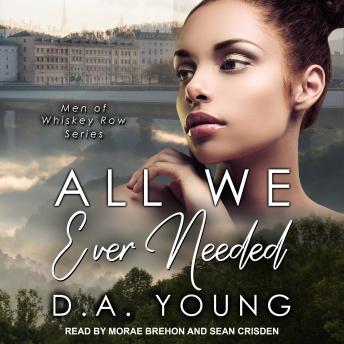 All We Ever Needed

#6 of Men of Whiskey Row

Always seen and treated like the baby of the overprotective Romankov/Sullivan clan, Katerina may have been the youngest child, and only girl, of Alexei and Vivienne but she was all woman. Kat worked tirelessly to establish her own identity to not only become a world-renowned jewelry designer but carved her own sense of independence, despite the closeness she shared with her family. To the outside, Kat had it all. The only thing missing was . . . love.

She found it in Holton Brammer.

The Swede's goal was to live a simple, drama-free life and share it with the woman of his dreams whom he'd coveted since . . . well, the particulars were best kept to himself. There were a few obstacles that had prevented Holt from making that dream a reality. They came in the form of her domineering father and her brothers-his three best friends since childhood.

Just when he's finally able to overcome those hurdles, Holt's family obligations and unknown forces turn his world inside out, threatening the safety and security of not only his peaceful life, but that of his most prized possession.