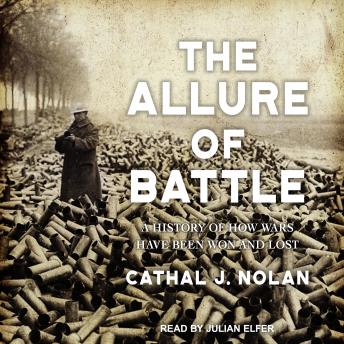 The Allure of Battle: A History of How Wars Have Been Won and Lost

History has tended to measure war's winners and losers in terms of its major engagements, battles in which the result was so clear-cut that they could be considered 'decisive.' Cannae, Konigsberg, Austerlitz, Midway, Agincourt-all resonate in the literature of war and in our imaginations as tide-turning. But these legendary battles may or may not have determined the final outcome of the wars in which they were fought.

Cathal J. Nolan's The Allure of Battle systematically and engrossingly examines the great battles, tracing what he calls 'short-war thinking,' the hope that victory might be swift and wars brief. As he proves persuasively, however, such has almost never been the case. Even the major engagements have mainly contributed to victory or defeat by accelerating the erosion of the other side's defenses. Massive conflicts, the so-called 'people's wars,' beginning with Napoleon and continuing until 1945, have consisted of and been determined by prolonged stalemate and attrition, industrial wars in which the determining factor has been not military but materiel.

Nolan's masterful book places battles squarely and mercilessly within the context of the wider conflict in which they took place. In the process it helps correct a distorted view of battle's role in war.