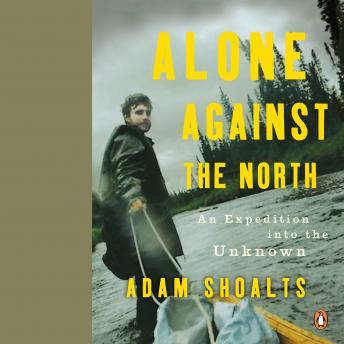 Alone Against the North: An Expedition into the Unknown

The age of exploration is not over.

When Adam Shoalts ventured into the largest unexplored wilderness on the planet, he hoped to set foot where no one had ever gone before. What he discovered surprised even him.

Shoalts was no stranger to the wilderness. He had hacked his way through jungles and swamp, had stared down polar bears and climbed mountains. But one spot on the map called out to him irresistibly: the Hudson Bay Lowlands, a trackless expanse of muskeg and lonely rivers, caribou and wolf—an Amazon of the north, parts of which to this day remain unexplored.

Cutting through this forbidding landscape is a river no explorer, trapper, or canoeist had left any record of paddling. It was this river that Shoalts was obsessively determined to explore.

It took him several attempts, and years of research. But finally, alone, he found the headwaters of the mysterious river. He believed he had discovered what he had set out to find. But the adventure had just begun. Unexpected dangers awaited him downstream.

Gripping and often poetic, Alone Against the North is a classic adventure story of single-minded obsession, physical hardship, and the restless sense of wonder that every explorer has in common.

But what does exploration mean in an age when satellite imagery of even the remotest corner of the planet is available to anyone with a phone? Is there anything left to explore?

What Shoalts discovered as he paddled downriver was a series of unmapped waterfalls that could easily have killed him. Just as astonishing was the media reaction when he got back to civilization. He was crowned “Canada’s Indiana Jones” and appeared on morning television. He was feted by the Royal Canadian Geographical Society and congratulated by the Governor General. People were enthralled by Shoalts’s proof that the world is bigger than we think.

Shoalts’s story makes it clear that the world can become known only by getting out of our cars and armchairs, and setting out into the unknown, where every step is different from the one before, and something you may never have imagined lies around the next curve in the river.

Alone Against the North: An Expedition into the Unknown