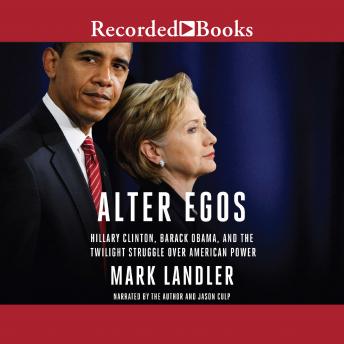 A deeply-reported, firsthand account of how Barack Obama and Hillary Clinton have come to embody two competing visions for the role of the United States in the world--and what that means for the 2016 presidential election. New York Times White House correspondent Mark Landler goes behind the speeches and press conferences, to the Situation Room debates and picnic-table lunches, where Obama and Clinton honed their two competing worldviews: his, cautious, inward-looking, suffused with a sense of limits; hers, muscular, optimistic, unabashedly old-fashioned. Alter Egos is about two ambitious political archrivals from very different backgrounds who became partners for a time, trailblazers who share a common sense of their historical destiny but who hold fundamentally different beliefs about how to project American power. With all the sweep of a grand history-and enlivened by an insider's access and plenty of news-Landler digs deep into the complex relationship between these two leaders and gives us a different way to think about Obama's legacy and Clinton's promise.