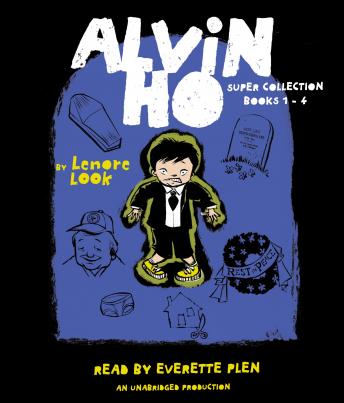 The first four books in the beloved and hilarious Alvin Ho chapter book series, which has been compared to Diary of a Wimpy Kid and is perfect for both beginning and reluctant readers.

Book 1: Alvin, an Asian American second grader, is afraid of everything—elevators, tunnels, girls, and, most of all, school. He’s so afraid of school that, while he’ s there, he never, ever, says a word. But at home he’s a very loud superhero named Firecracker Man, a brother to Calvin and Anibelly, and a gentleman-in-training, so he can be just like his dad.

Book 2: Alvin’s worst fear has come true: he has to go camping. What will he do exposed in the wilderness with bears and darkness and . . . pit toilets? Luckily, he’s got his night-vision goggles and water purifying tablets and super-duper heavy-duty flashlight to keep him safe. And he’s got his dad, too.

Book 3: What could possibly be so scary about a birthday party? Let Alvin explain:
• You might be dressed for bowling . . . but everyone else is dressed for swimming.
• You could get mistaken for the piñata.
• You could eat too much cake.
• You could throw up.
So when Alvin receives an invitation to a party—a girl’s party—how will he ever survive?

Book 4: Alvin is facing something truly scary: the idea that someone he loves might die. When Alvin’s GungGung loses his best friend, Alvin (gulp) volunteers to go with him to the funeral.