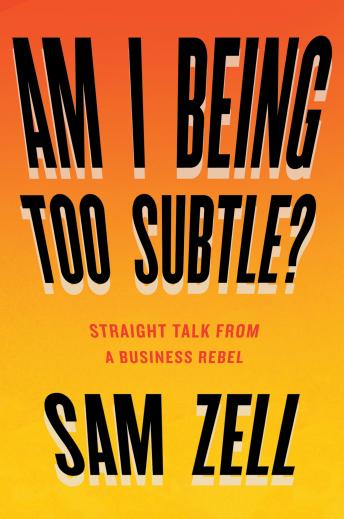 Am I Being Too Subtle?: The Adventures of a Business Maverick

The traits that make Sam Zell one of the world’s most successful entrepreneurs also make him one of the most surprising, enigmatic, and entertaining mavericks in American business.

Self-made billionaire Sam Zell consistently sees what others don’t. From finding a market for overpriced Playboy magazines among his junior high classmates, to buying real estate on the cheap after a market crash, to investing in often unglamorous industries with long-term value, Zell acts boldly on supply and demand trends to grab the first-mover advantage. And he can find opportunity virtually anywhere—from an arcane piece of legislation to a desert meeting in Abu Dhabi.

“If everyone is going left, look right,” Zell often says. To him, conventional wisdom is nothing but a reference point. Year after year, deal after deal, he shuts out the noise of the crowd, gathers as much information as possible, then trusts his own instincts. He credits much of his independent thinking to his parents, who were Jewish refugees from World War II.

Talk to any two people and you might get wild swings in their descriptions of Zell. A media firestorm ensued when the Tribune Company went into bankruptcy a year after he agreed to steward the enterprise. At the same time, his razor-sharp instincts are legendary on Wall Street, and he has sponsored over a dozen IPOs.  He’s known as the Grave Dancer for his strategy of targeting troubled assets, yet he’s created thousands of jobs. Within his own organization, he has an inordinate number of employees at every level who are fiercely loyal and have worked for him for decades.

Zell’s got a big personality; he is often contrarian, blunt, and irreverent, and always curious and hardworking. This is the guy who started wearing jeans to work in the 1960s, when offices were a sea of gray suits. He’s the guy who told The Wall Street Journal in 1985, “If it ain’t fun, we don’t do it.” He rides motorcycles with his friends, the Zell’s Angels, around the world and he keeps ducks on the deck outside his office.

As he writes: “I simply don’t buy into many of the made-up rules of social convention. The bottom line is: If you’re really good at what you do, you have the freedom to be who you really are.”

Am I Being Too Subtle?—a reference to Zell’s favorite way to underscore a point—takes readers on a ride across his business terrain, sharing with honesty and humor stories of the times he got it right, when he didn’t, and most important, what he learned in the process.

This is an indispensable guide for the next generation of disrupters, entrepreneurs, and investors.

Am I Being Too Subtle?: The Adventures of a Business Maverick