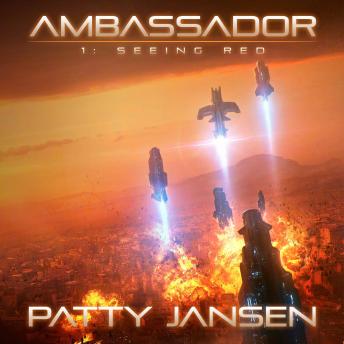 'I have been reading SCIFI for about 35 years. The Ambassador series is my latest new addiction. I have read the series pretty much non stop.'

This volume marks the start of the Ambassador series, a growing series of standalone adventures of diplomat Cory Wilson.

Cory is the first person from Earth appointed observer at Gamra, the alien organisation that monitors the FTL travel network. He’s had years of training in alien customs and languages…

… all wiped out the instant President Sirkonen is murdered by an alien entity.

Borders close, military goes on alert, the many aliens living on Earth are considered enemies, and Cory is recalled.

Except he is stuck in the Gamra capital Barresh, and he has some information that may reveal who killed the president, information that requires him to confront the most powerful man at Gamra, from a society where merely looking into the eye of a superior can get you murdered.