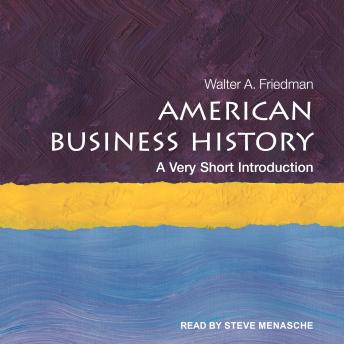 Written By: Walter A. Friedman

By the early twentieth century, it became common to describe the United States as a 'business civilization.' President Coolidge in 1925 said, 'The chief business of the American people is business.' More recently, historian Sven Beckert characterized Henry Ford's massive manufactory as the embodiment of America: 'While Athens had its Parthenon and Rome its Colosseum, the United States had its River Rouge Factory in Detroit . . . ' How did business come to assume such power and cultural centrality in America?

This volume explores the variety of business enterprise in the United States and analyzes its presence in the country's economy, its evolution over time, and its meaning in society. It introduces listeners to formative business leaders (including Elbert Gary, Harlow Curtice, and Mary Kay Ash), leading firms (Mellon Bank, National Cash Register, Xerox), and fiction about business people (The Octopus, Babbitt, The Man in the Grey Flannel Suit). It also discusses Alfred Chandler, Joseph Schumpeter, Mira Wilkins, and others who made significant contributions to understanding of America's business history. This VSI pursues its three central themes-the evolution, scale, and culture of American business-in a chronological framework stretching from the American Revolution to today.

by Walter A. Friedman