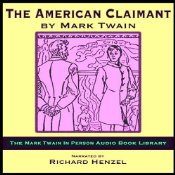 Young Lord Berkeley has discovered that his family's title and wealth was fraudulently obtained by previous generations, and announces to his his father, Lord Rossmore, that he intends to travel to America, there to return the Earldom of Rossmore to the rightful heir, along with all of its wealth, titles, and privilege, and to begin his life over again — "begin it right — begin it on the level of mere manhood, unassisted by factitious aids, and succeed or fail by pure merit or the want of it." As it happens, "The Rightful Earl" is an imaginative and enterprising attorney/inventor/office-seeker known as Colonel Mulberry Sellers. While less familiar to Mark Twain fans than Tom Sawyer, Connecticut Yankee, or Huckleberry Finn, "The American Claimant" is a delightful tale, told with Mark Twain's trademark American humor, his biting social satire, and his well-drawn characters. Narrated by American actor and Mark Twain interpreter Richard Henzel, whose "Mark Twain In Person" has been seen over a thousand times in the U.S., Canada, and Great Britain.