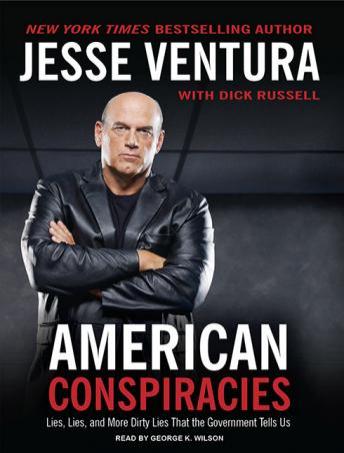 American Conspiracies: Lies, Lies, and More Dirty Lies That the Government Tells Us

In this explosive account of wrongful acts and ongoing cover-ups, Jesse Ventura takes a systematic look at the wide gap between what the American government knows and what it reveals to the American people. For too long, we the people have sat by and let politicians and bureaucrats from both parties obfuscate and lie. And according to this former Navy SEAL, former pro wrestler, and former Minnesota governor, the media is complicit in these acts of deception. For too long, the mainstream press has refused to consider alternate possibilities and to ask the tough questions. Here, Ventura looks closely at the theories that have been presented over the years and separates the fact from the fiction.

In Ventura's eyes, the murder of Abraham Lincoln and the assassinations of the Kennedys and Martin Luther King all need to be reexamined. Was Watergate presented honestly, or was the CIA involved? Did the Republican Party set out to purposefully steal two elections on behalf of George W. Bush? Has all the evidence been presented about the 9/11 attacks, or is there another angle that the media is afraid to explore? And finally, is the collapse of today's financial order and the bailout plan by the Federal Reserve the widest-reaching conspiracy ever perpetrated?

American Conspiracies: Lies, Lies, and More Dirty Lies That the Government Tells Us