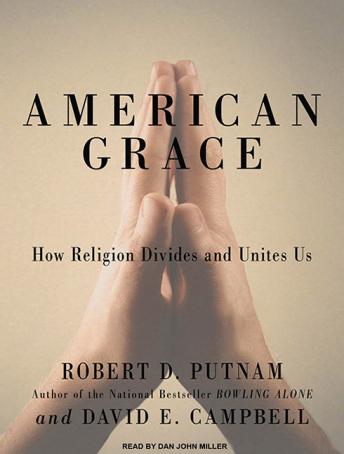 American Grace: How Religion Divides and Unites Us

American Grace takes its findings from two of the largest, most comprehensive surveys ever conducted on religion and public life in America, plus in-depth studies of diverse congregations-among them a megachurch, a Mormon congregation, a Catholic parish, a reform Jewish synagogue, and an African American congregation.

From abortion to gay marriage to feminism, this book shows how religion has influenced politics in America-and vice versa. The discoveries are often unexpected: The most politicized churches tend to be liberal, not conservative, congregations. Faith matters less to Americans than their communities of faith. Most Americans marry outside their religion. And nearly half of all Americans change their religion at some point during their lifetime.

Robert D. Putnam won huge acclaim for Bowling Alone and Better Together. Together with coauthor David E. Campbell, Putnam brings his distinctive brand of in-depth research and analysis to religion in America.

American Grace: How Religion Divides and Unites Us