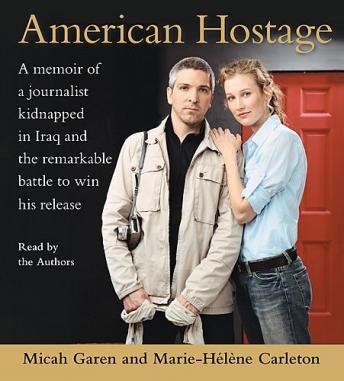 Micah Garen and Marie-Helene Carleton were journalists and filmmakers working in Iraq on a documentary with their Iraqi translator Amir Doshi. In the late summer of 2004, they began to wrap up their work, and Marie-Helene returned home while Micah remained for a final two weeks of filming. As Micah and Amir were filming in a Nasiriyah market, something went horribly wrong: Micah was unmasked as a foreigner and kidnapped by militants in southern Iraq.
Home in New York, Marie-Helene awoke to a gut-wrenching phone call from Micah's mother with word of his abduction. She promised Micah's mother the impossible -- that together they would bring Micah back alive.
American Hostage is the remarkable memoir of Micah Garen's harrowing abduction and survival in captivity, as well as the heroic and successful struggle of Marie-Helene; along with family and friends to win Micah's and Amir's release from their captors. The world watched and waited as Micah's drama unfolded, but the authors, now safely home and engaged to be married, detail the dramatic untold story.