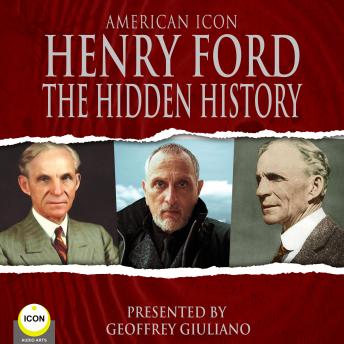 "If you think you can do a thing or think you can't do a thing, you're right."
"Coming together is a beginning, staying together is progress, and working together is success."
"Failure is simply the opportunity to begin again, this time more intelligently." Henry Ford
The great Henry Ford was the unforgettable American captain of industry and unequalled business magnate who founded the Ford Motor Company and the unequalled force behind th development of the assembly line technique of mass production. Here, in this unique and very accessible audiobook, Ford tells his own story. A must for businessmen everywhere and a lauded addition to all school and university systems. A true audio treasure!
GEOFFREY GIULIANO is the author of thirty two internationally best selling books published by the biggest publishers in the world from 1984 to today. He is also an acclaimed Hollywood film actor, director, designer, and is the voice on over 500 popular audiobooks.
Series producer Avalon Giuliano in New York
Produced by Alex Franchi in Milan
Edited and mixed by Macc Kay in Bangkok
ICON intern Eden Garret Giuliano
Music by Audionautix