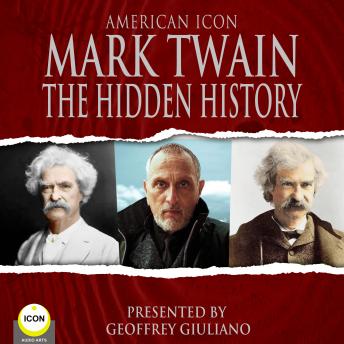 'The report of my death was an exaggeration.''
'Kindness is the language which the deaf can hear and the blind can see.'
'The secret of getting ahead is getting started.' Mark Twain
Samuel Langhorne Clemens, better known by his pen name Mark Twain, was a uniquely American writer, humorist, entrepreneur, publisher and lecturer. Among his novels are The Adventures of Tom Sawyer and its sequel, the Adventures of Huckleberry Finn, the latter often called 'The Great American Novel'. We know the work but what about the great man behind it? In this well told audiobook Twain speaks about particulars of his turbulent life and times. A must have addition to all university and school systems.
GEOFFREY GIULIANO is the author of thirty two internationally best selling books published by the biggest publishers in the world from 1984 to today. He is also an acclaimed Hollywood film actor, director, designer, and is the voice on over 500 popular audiobooks.
Series producer Avalon Giuliano in New York
Produced by Alex Franchi in Milan
Edited and mixed by Macc Kay in Bangkok
ICON intern Eden Garret Giuliano
Music by Audionautix