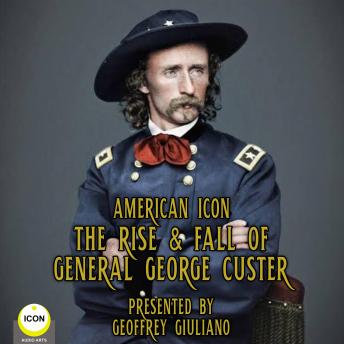 "The Army is the Indian's best friend."
"I would be willing, yes glad, to see a battle every day during my life" General George Armstrong Custer
George Armstrong Custer, a flamboyant American military leader first came to the world's attention as a cavalry commander for the Union army during the American Civil War and in the opening of the Western territories. The influx of whites into American Indian lands angered the Sioux nation, thus a war resulted between them and the United States. In 1876, Custer was instructed to help drive the Sioux and Cheyenne onto their reservations. On June 25, 1876, however, as the Seventh Cavalry approached the Little Big Horn River, the soldiers encountered an Indian village and Custer took to the offensive. The Sioux warriors however, greatly outnumbered Custer and his men and Custer and his forces were wiped out. This is the real story of one of America's most legendary, and ultimately, unfortunate military hero's.
GEOFFREY GIULIANO is the author of thirty two internationally best selling books published by the biggest publishers in the world from 1984 to today. He is also an acclaimed Hollywood film actor, director, designer, and is the voice on over 500 popular audiobooks.
Series producer Avalon Giuliano in New York
Produced by Alex Franchi in Milan
Edited and mixed by Macc Kay in Bangkok
ICON intern Eden Garret Giuliano
Music by Audionautix