American Inquisition: The Era of McCarthyism 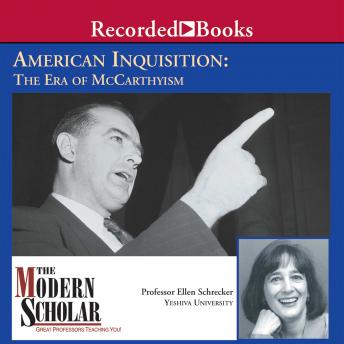 During the early years of the Cold War, the anticommunist witch hunt that we now call McCarthyism swept through American society. As we will discover, McCarthyism was much more than the career of the blustering senator from Wisconsin who gave it a name. It was the most widespread and longest-lasting episode of political repression in American history. Dozens of men and women went to prison, thousands lost their jobs, and untold numbers of others saw what happened to those people and refrained from expressing controversial or unpopular ideas. McCarthyism remains all too relevant today; if nothing else, it reminds us that we cannot take our basic freedoms for granted. This course aims to provide a basic understanding of what happened during the Cold War red scare of the late 1940s and 1950s. It will look at this red scare from the perspective of both the victims and the perpetrators, and will try to answer the following question: How could such a politically repressive movement arise in a modern democratic society such as the post-World War II United States? In order to answer that question, this course will look at earlier red scares as well as at some of the key players and institutions involved. It will examine those aspects of the domestic and international politics of the late 1940s and 1950s that contributed to the rise of the anticommunist furor. It will also explore the most important political trials of the era as well as investigate the experiences of its more anonymous (and perhaps more typical) victims. Finally, it will assess the costs of McCarthyism. How did it affect the men and women directly involved with it? And, more important, how did it affect American culture, politics, and the rest of American society?

American Inquisition: The Era of McCarthyism