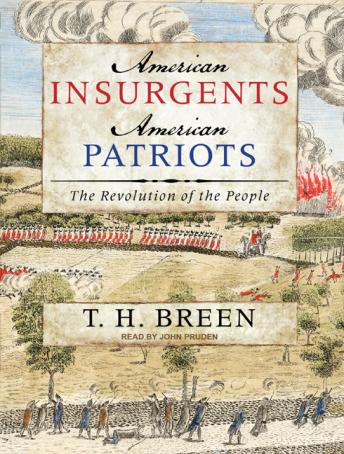 American Insurgents, American Patriots: The Revolution of the People

Before there could be a revolution, there was a rebellion; before patriots, there were insurgents. Challenging and displacing decades of received wisdom, T. H. Breen's strikingly original book explains how ordinary Americans-most of them members of farm families living in small communities-were drawn into a successful insurgency against imperial authority. This is the story of our national political origins that most Americans do not know. It is a story of rumor, charity, vengeance, and restraint. American Insurgents, American Patriots reminds us that revolutions are violent events. They provoke passion and rage, a willingness to use violence to achieve political ends, a deep sense of betrayal, and a strong religious conviction that God expects an oppressed people to defend their rights. The American Revolution was no exception.

A few celebrated figures in the Continental Congress do not make for a revolution. It requires tens of thousands of ordinary men and women willing to sacrifice, kill, and be killed. Breen not only tells the history of these ordinary Americans but, drawing upon a wealth of rarely seen documents, restores their primacy to America's road to independence. Mobilizing two years before the Declaration of Independence, American insurgents in all thirteen colonies concluded that resistance to British oppression required organized violence against the state. They channeled popular rage through elected committees of safety and observation, which before 1776 were the heart of American resistance. American Insurgents, American Patriots is the stunning account of their insurgency, without which there would have been no independent republic as we know it.

American Insurgents, American Patriots: The Revolution of the People