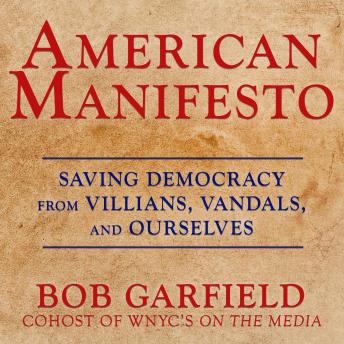 American Manifesto: Saving Democracy from Villains, Vandals, and Ourselves

As is often observed, Trump is a symptom of a virus that has been incubating for at least fifty years. But not often observed is where the virus is imbedded: in the psychic core of our identity. In American Manifesto: Saving Democracy from Villains, Vandals, and Ourselves, Bob Garfield examines the tragic confluence of the American preoccupation with identity and the catastrophic disintegration of the mass media. Garfield investigates how we've gotten to this moment when our identity is threatened by both the left and the right, when e pluribus unum is no longer a source of national pride, and why, when looking through this lens of identity, the rise of Trumpism is no surprise. Overlaying that crisis is the rise of the Facebook-Google duopoly and the filter-bubble archipelago where identity is tribal and immutable.

But fear not! WNYC's On the Media cohost Garfield has ideas about how we may counter the forces of fragmentation-the manifesto itself: six steps for citizens to take to reassemble our fractured society. A quick, fascinating listen, American Manifesto offers not only a vision 'of a country in extremis,' but also a plan for how to address the ways in which our democracy is imperiled. American Manifesto is a call to action, unmistakable and provocative.

American Manifesto: Saving Democracy from Villains, Vandals, and Ourselves